I'm playing heads-up in a cash game (only 2 players at the table).

The villain min-raises. I raise 5xBB. He calls.

My reasoning is: If I were the villain, I would not have called unless I had A♠ (and probably another spade), because the message here is that it's totally reasonable to consider I have A♠ (recall that I raised preflop, etc.)

I thought it was a smart move for that reason (the probability of him having 2 spades including A♠ is < 50 % ).

However one of my friends disagrees with this and tells me it was stupid because I had nothing and the opponent could have called (which I totally doubt).

I admit I am no pro poker player... Your analyses are bound to help me. Many thanks

*Range charts made with https://premiumpokertools.com/equity-calculator

Here's my analysis! Assuming your opponent is min-raising about 80ish percent of hands preflop, a reasonable calling range against your small 3-bet size might be this: 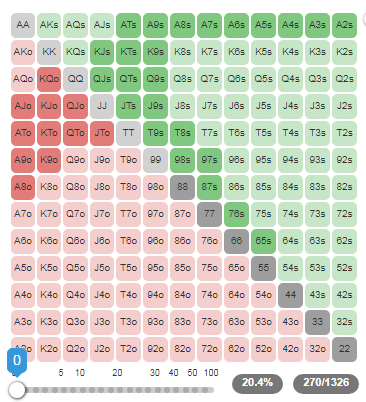 After the flop, removal effects make villain's range look like this: 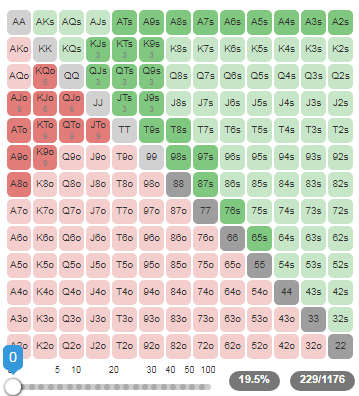 When you shove 3.5 times the flop, the villain's minimum defense frequency is 22%. If the villain only calls 2-pairs (18 combos), straights (20 combos), and flushes (15 combos) they're already at that 22%. Generally bet sizing is about finding a size that puts your opponents range into the most awkward spot, and this 3.5 x pot size doesn't do it here since they can call pretty comfortably with the above 53 combos. Villain might also reasonably call with AsJx with good equity and the nut-flush blocker too. If they call wider than I estimated preflop and need to defend wider, then KxTs, QxTs, JxTs could make reasonable bluff catchers too.

For these reasons, I disagree with your statement "My reasoning is : If I were my opponent, I would not have called unless I had Ace of spades (and probably another spades)". If you play this way, you will almost certainly be over-folding in these spots. Villain could (and probably would) call wider than this. Even if you have a read that the villain plays too tight, a smaller bet size (50% - 75% pot) would probably get an overly tight opponent to over-fold here.

Another caution (though not necessarily a mistake!) I would make here, is with the particular hand that you chose to bluff with. When you shove 3.5 x the pot, we know that your opponent doesn't have to call you with anything worse than 2-pair. That means your value hands are most likely going to be sets, straights, and flushes (9 combos of sets (KK, QQ, JJ), 16 combos of straights (AT), and, say, about 25 combos of flushes (suited aces, low suited connectors and gappers). That's about 50 hands for value. Your value bet to bluff ratio should be 9:7 (close to 50:50) given your overbet size. I'm not entirely sure what your range might look like here, but before bluffing aces I might look to bluff hands with a spade and a good blocker (As, Ts, maybe 9s) since you make it less likely that your opponent has a flush or the AT/T9 straight, and in case you do get called by a lower flush or a straight, you have a redraw to beat them. If you agree with me here and do bluff with these spades, you'll just have to be careful not to bluff every ace you have too, since you'd probably be over-bluffing.

It wasn't the worst move you could of made, that would of been check raising all in.

You where right taking over the lead in the hand, I am assuming he was first in so the buttons range here is ATC, any two cards. I think your raise was slightly small, should of been at least three time his twenty and maybe slightly more. I really want someone motivated to give up the steal here.

The all in bet on the flop was reckless. You could of achieved 99% as much by making a half pot to full pot size bet, without the risk of going broke.

You did not say if it was cash or tournament, I am guessing cash. You also did not say if there were other players that had limped, I assuming none, but one or more I would of leaned toward just letting my blind go. A-9 does not play well in a multiway action pot.

I think you brilliantly misplayed the hand. Here are my arguments:

I admit I am no pro poker player.

And I think your opponent isn't either, because you both are playing short stacked. Actually, it's a live, friendly cash game. You have 40 BB and he has 60. Why aren't you buying in for 100 BB, so you can win your opponent's stack?

If I were my opponent...

No need for leveling, because the opponent only cares about his cards and, sometimes, to see if you're bluffing. All you have to do is to think in ranges.

I would either check/check and see a showdown to see if I win or make small bets to try to keep straight draws and other weird, worse hands in the pot. If turn and river are bad cards (complete a straight or flush), shot down and fold with the first occasion.

Later edit. You also say that:

Beside the fact that I'd like to see how did you get to this number, he needs to have something way rarer than 50% to rob you of your stack, long term.

9
Do I call a turn all-in with KK with against a possible flush?
6
Should I call opponent's flop re-raise with trips?
5
How to maximize expectation with pocket aces and an Aces Cracked bonus running
6
What I did was right?
3
The need of calculating EV?
3
HU EV facing an open shove from sb with ~10bb
4
Should I go all-in with AAs in this situation?
2
Push or just call on the turn with trips against an over-pair and you know it?
5
Can i fold my trips here?
3
Dealing with excessive clock calls?