Does AA have the highest Equity in "double-board-bomb-pot" with 9 players?

I fielded a Poker StackExchange question the other day about whether AA is the best starting hand in Texas Hold-Em No Limit vs. 8 other players. Indeed, it is so. Now I have a variant of this question involving Texas Hold-Em double-board-bomb-pot.

Def: Double-board-bomb-pot - Each player antes something like 5x the typical big blind (e.g., nine antes of $5 if you're playing a fun home game of $0.50/$1.00), players are dealt two hole cards face down, and then the dealer goes straight to two flops without any pre-flop betting. If two players split the boards (each wins one board) then they split the pot. If one player wins both boards he wins the entire pot.

This article explains a little more in-depth what a "bomb pot" is (although the author takes a bit of a dim view on it).

The other day, while playing a few hands of "double-board-bomb-pot" towards the end of the night, some friends and I got to talking about which hole cards "you'd most want" in this game. My intuition tells me that AA is not the best starting hand due to:

I am hard pressed to suggest a better starting hand than AA for this game, but one that has been suggested and come up several times is JT suited. With that said, I don't think the typical EV starting hand calculations are enough here. I'd be interested to see some type of monte-carlo simulation for this game, but the complexity of coding that up seems quite high. At any rate, if anyone can mathematically prove/disprove AA is the best starting hand in double-board-bomb-pot I'd be very interested to see those calculations and logic.

We can conclude that AA is still the best starting hand if you are playing a double board bomb pot. It may not seem this way because a lot of hands that would not normally see a flop get to realize some equity, but AA will win more frequently than every other starting hand given random flops. Let me show you some statistics: 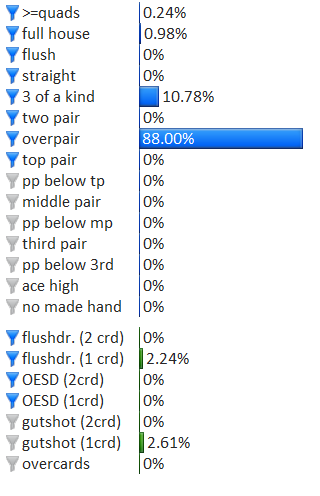 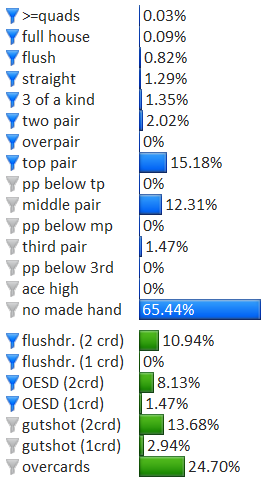 Above is the probabilities of made hands after the flop for AA and JTs (AA on the top and JTs on the bottom). The big thing to note here is that JTs (and other suited connectors like 56s) will have no made hand on 65% of flops. Suited connectors have a better chance of flopping draws and stronger hands like flushes and straights, but note how low the probability is. JTs will only flop 2 pair or better ~5% of the time.

It is important to note that winning one board would still be profitable for AA (your question makes it seem like only winning both boards is profitable). Also, keep in mind that AA will be cracked much more frequently when there are more players in the double board bomb pot. Here is a monte-carlo simulation of AA vs JTs with an entire run out on one board (meaning flop turn and river have been dealt): 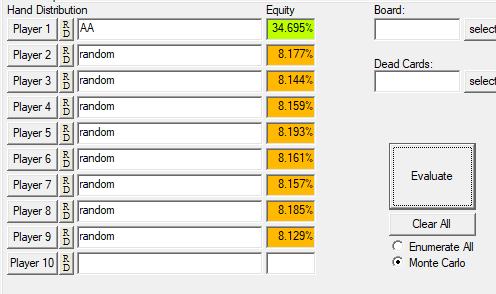 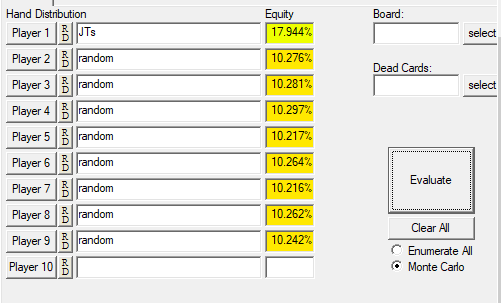 In conclusion, AA does have the highest equity in a double board bomb pot, but because there is 2 boards and all players involved after the flop AA will be cracked much more frequently than if it was heads up on one board. It also applies for any strong hand, this is what makes double board bomb pots so fun to play :)

Not the answer you're looking for? Browse other questions tagged texas-hold-em cash-game probability starting-hand equity or ask your own question.

2
What's the best hand against 9 people in the hand?

5
MTT - flush draw vs loose big'o'stack
1
If you could design your own poker tools what would they look like?
1
Probability of making two pairs (Hold'em)
3
Versus random hands
4
What are the top money making starting hands?
2
How do straddle and antes effect the absolute stake?