I've just started getting into PLO but have quickly realized the low-stakes games are next to unbeatable because of rake. Apparently paying 2buyins/1k hands in rake is not uncommon.

An example of a site with a huge rake at the smaller stakes is PokerStars. Here you can see the players that played the most hands in the last 12 months at the 0.50/1.00$ level, which is a rather soft level with a lot of people that don't really know what they're doing.

Only 3 of these 25 regular players are winners, they altogether paid almost $8 million in rake for the 63 million hands they played. 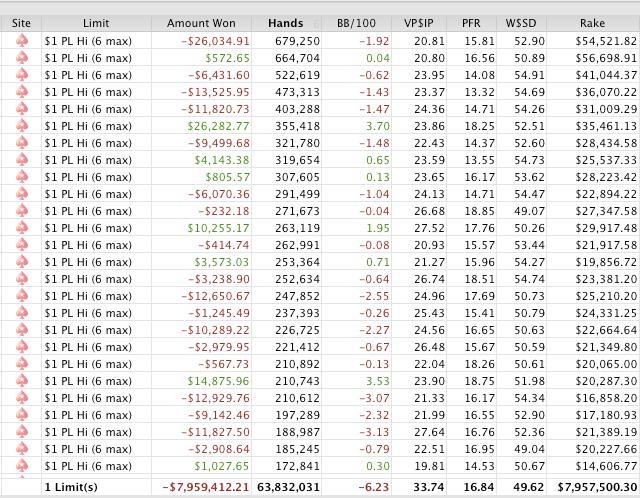 Does anyone play at a site that treats PLO differently?

Everything you want is listed here. According to the table, PokerStars has the lowest rake at PLO games. Not surprising for me, though.

Not the answer you're looking for? Browse other questions tagged rake or ask your own question.

5
What's considered an acceptable rake in tournaments?
3
Heads up NLHE, is it harder to beat rake then full ring?
7
Adjustments to the rake?
3
Is there a site that compares “effective” rake?
0
Pokerstars - Do they rake on the part of the pot that is not 'effective' when the larger stack goes all-in?