How to deal with people who randomly go all-in?

In many freeroll or smaller buy-in tournaments, some people just go all-in every hand or make huge bets for no apparent reason. This is a bit annoying because it scares me somewhat, but it also might be an opportunity I guess.

How should I deal with players like this? What things should I be thinking about when facing such players to maximise my winrate against them?

This is very much related to this question: How big an edge can you have on a tournament field ? ROI vs edge question

You have to balance the chance that your hand will win against a random hand with the actual advantage you gain from getting their stack. In general, I'd advise folding with less than a premium pocket pair preflop, and continuing on the flop with TPGK or better.

Depends on how much often this all-in is presenting by for example using hud statistics software, you can measure this and push at least for example 20% of his range counting from top of course.

If you want measure this you can do this via Monte Carlo method using for example Equilator from PokerStrategy. You must set ranges to top 60% against your top 12% then you will have probability of winning against him using this tactic.

Generally I find that those people end up bluffing off all of their chips eventually. The people who challenge them tend to be poorer players as well. So while this tends to end with the result of someone at my table having a significant chip advantage I very rarely see that these people outlasted me.

In a tourney the opening rounds are about survival rather than accumulation. So I try to act conservatively and rake in a few small pots enough to keep me near average chip stack. Once the reckless are gone I tend to loosen up a bit.

There are a lot of players who insta-shove a lot at the start of freerolls, I suspect on the grounds that they'll either double up and play from a strong position, or get knocked out and move on to the next one - either way avoiding having to spend a lot of time grinding away with an average or small stack, which presumably isn't their bag. That's what you have to put up with playing at a level where losing your buy-in in one hand doesn't hurt.

The biggest problem in calling someone like this even with AA is that there may well be another of them to your left (who's even more tempted by the chance to triple-up). Your aces may be a huge favourite against a random hand, but will suffer as each extra villain piles in. Before calling, think position, think what you know about the people still to act.

I've wondered this question before too, but in the context of playing poker for free on Zynga where people do this all the time which is a little different from a tournament but much of the same basic reasoning applies.

The difficult situation is where don't have a pair but have two cards that are relatively high and maybe even suited. If your opponent has a pocket pair, the decision to fold is easy as you are notably less than 50% to win the hand, but even if you're up against an opponent who doesn't know what they're doing, you probably have to give them credit on an all in bet in a tournament where they put in the effort to enter for at least one really high card like an A or a K and maybe even two high cards, like two face cards. This puts you in a situation where your probability of winning is somewhere in the 40-60% range, and once again, you probably don't want to waste your money on a big bet where the odds are only mediocre.

One final important thing to consider in these situations is the possibility of someone else entering the pot. Even if you have AA, your probability of winning when a third person enters the pot drops to about 66% and a fourth person makes it only a little better than 50%. So this is getting into the trouble range where you very well may be risking getting eliminated from the tournament, although if you win you're in really great shape to stay in for a longer time. In a regular game this is the situation you dream of because the pot odds are excellent.

Above all, stay level headed in these types of situations. Don't let it upset you. Don't start thinking that just because you are a better poker player than this person that random chance will respect you. Be patient. Poker requires lots of waiting, and you want to be betting lots of your money when your odds are good, not when someone who doesn't know what they're doing gets you to play a mediocre hand. General advice in several poker books I've read is that when playing against people who aren't good players, you need to play tighter and just be ready to show down good cards. The player who doesn't know what they're doing will make a lot of calls that they shouldn't, and you want to be in a pot with them when you have a really good hand, not when you're tossing a coin.

In these situations you have to push an equity edge vs their range, there's not a lot more your can do. Just construct a range that will beat theirs and get the chips in.

When playing with loose aggressive players remember to always wait for a strong hand.They tend to go allin with in the first few hands of a freeroll , unless you have AA.KK.QQ.AK Dont get pulled in because there might be a multiple of them hope this helps

If you want a simple answer, never let anyone bully you at the table

If people are shoving wide then call wide. If you bust them a few times they will soon stop shoving wide and you can go back to your normal game

OK the down vote means u want a different answer. This is why you should never let anybody bully you. If you have a bottom 10% hand and are up against a top 10% hand, you are only a 2-1 dog. Here is the maths: 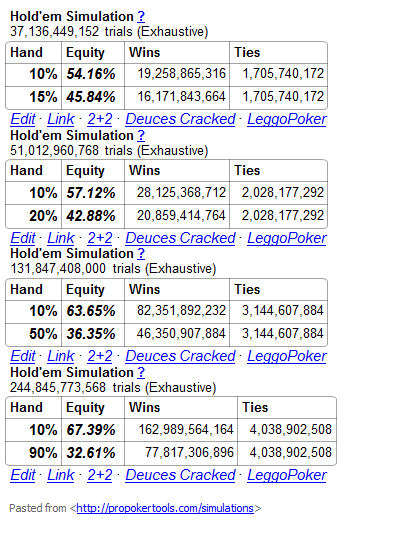 16
How big an edge can you have on a tournament field ? ROI vs edge question
9
Dealing with Rookie / Novice Players
2
How does an opponent's all-in range change after showing an all-in bluff in an online heads-up tournament?
1
Fold in preflop but could win with a flush. How to deal in this situation?

2
How does an opponent's all-in range change after showing an all-in bluff in an online heads-up tournament?
9
Is shoving all in with a weaker player the best strategy?
7
Short stack play - best way to deal with it?
6
Why some people all-in in the VERY first hand?
5
How Gus Hansen came up with 30%?
14
How to deal with a table that always calls?
0
Closing out a tournament
3
Is all-in calling 2 all-ins with KK a bad move pre-flop?
1
How should I proceed (in non-home games / with strange(unkown) people / in my online server) if I have to suddenly close a tournament?
1
How to deal with poker community that play without bankroll management