How big an edge can you have on a tournament field ? ROI vs edge question

Is it worth it to call or the fold get you more EV in the long run? What is the ROI limit when you should definitely fold this hand?

What's with the same situation, when the player goes all-in and accidentally shows his hand (but not dead) QJs and you got AKs (everything is the same, except you have 60% equity) ?

The decision is based on the extra equity you gain in the tournament if you win. In the first instance, you have an 80% chance at a 600bb stack, and a 20% chance at not cashing. Your ROI with a 600bb stack would need to go up based on that stack to make the call worthwhile. The breakeven point is

Solving for the advantage variable, you would need at least a 1.25x advantage with 600bb over 300bb to make the call profitable.

In the second scenario, .8 becomes .6, and your advantage must be at least 1.66x with the bigger stack.

If you have the best pre-flop hand and one opponent shoved before you. Perfect scenario for Aces. What can stop you here to call? I guess nothing. You have to call. Well, if you lose then it was not your tournament.

Exception is when you are in the middle or close to the end of the tournament when, for instance, 100 people qualify for some other tournament and, let say, 120 people left. If you are a big-to-massive stack, then folding will be the right move because here the target is not to win the tournament, but to be in the top 100. If your winning chances are at max 85% against 72 off-suit, you qualification chance is close to 100%.

I clearly do not understand people advocating folding aces. It is very weak play to fold Aces in your situation.

ProPokerTools can answer all your questions. Ironically AA is stronger against the other strongest hands (AKs, KK, QQ etc) than it is against middling hands like 78s or JQs 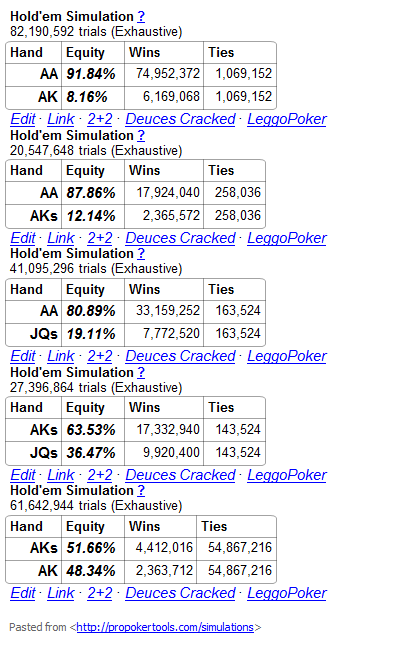 Basically don't ever fold your AA in any HU situation

The ROI is the return on investment . It's the same as the expected value, or EV.

It's a GIVEN in this question, so we'll just have to assume that we accept the number and it's based on some kind of fact of reality. Perhaps years of results. BTW, this would mean - on average - the Hero is earning $30k, on a $10k event. This is obviously WAY BEYOND THE PALE for a real life situation. But let's just assume it's true: you're a poker player who earns 300% on his money every time he sits down to play. Perhaps you're playing with retarded people, or you're cheating children. Let's run with it...

Mason Malmuth has already shown how to do similar math. Normally this question is formulated along the lines of:

Since we already know the EV. What don't we know? We don't know what he's doing to be this Mr. Super Beast with a +300% ROI! He's almost certainly cheating, or something like that. Probably then you should dump the aces, because you'll have way better than 4:1 chances in the future, and since you can see through the cards or something, you should wait.

The fact we can calculate the odds of winning hands against these particular ranges [4:1 and 3:2 respectively], doesn't give us enough information to calculate the answer to the question.

Again, Malmuth has shown how to answer this if we assume we don't know, a priori, the EV of the Hero. That is, if you assume everyone has the same skill level, you can do this calculation. I'll leave that for another day! However, in this case we are given the Hero is some sort of savant. We know that's not because of his normal, that is average skill, so we can't answer strategy questions. We don't know what kind of game he is playing!

So the answer is: IT DEPENDS ON WHATEVER STRATEGY IS GENERATING THIS RETURN ON INVESTMENT. You cannot calculate it in the standard way, vis-a-vi Malmuth, which assumes equal skill.

60
How to deal with people who randomly go all-in?

2
How does an opponent's all-in range change after showing an all-in bluff in an online heads-up tournament?
5
Tricky Tournament Bubble Situation
10
When should you defend your big blind in tournament play?
7
Heads Up NL Holdem: Best strategy against all in every hand
3
Showing cards with one player all-in but other player active
2
"Waiting for a better spot" in tournaments
1
220£ tournament
0
Can showing cards in a tournament constitute a call to an all-in?
1
Tournament Ante Deduction Player All In