Aside from chucking a curve ball at them, i.e. an oddly timed/sized raise, showing poor cards etc. are there any deeper plays that you guys could hint at for me?

You don't make plays to convince your opponents that you have a polarized hand range, you just polarize your hand range. If they fail to pick up on that, you've profited greatly.

There are generally three types of ranges:

You value greatly when an opponent doesn't realize you've polarized your range to include only strong value and air since you've obviously greatly increased your expectation with said air hands (your bluffs). As such, it's entirely counter-productive to try and convince opponents you have a polarized hand range.

Ah, now we're getting into the territory of balance and game theory optimal play. This has been quite a hot topic for some years now.

When playing against recreationals, all you really have to think about is maximally exploiting your opponent so that you can maximize your profits. But if you are playing against a skilled, thinking opponent that is trying to do the exact same thing you are, things get far more complicated.

It becomes paramount to balance your strategies so that they aren't easily exploitable.

Take, for instance, the following situation that frequently occurs in heads-up hyper-turbo SNGs. Most regs will open 90%+ of all hands on the button. When playing other regs, they will frequently exploit this by 3-bet shoving a wide range of hands. But how do they choose said hands?

The math works out that, if an opponent is opening his button to 2x the blind with 70%+ of all hands, and is only calling with a tight value range {44+, A7s+, A8o+, KQs}, you can basically jam any two cards when he does so. 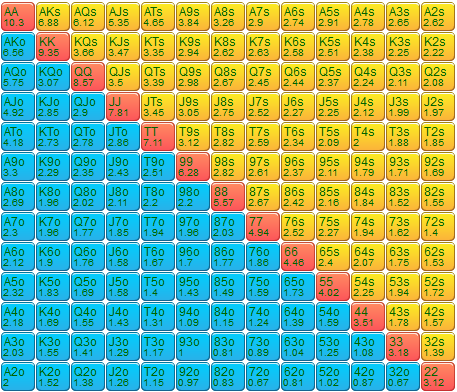 But, remember, we're playing a reg. We don't want to implement a strategy that is so obviously exploitable against a thinking opponent. And, on top of that, we are trying to maximize our expectation with each hand in our range. As such, we shouldn't be 3-bet shoving a hand like JTs as it will obviously have a better expectation by flatting his open than it will by 3-bet shoving it. Therefore, we polarize our 3-bet shoving range. 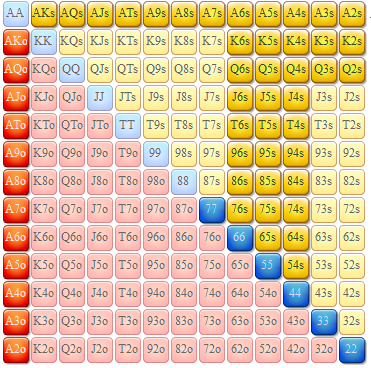 Now we're 3-bet shoving with our value hands as well as weaker suited hands that don't necessarily play well postflop (including weaker suited connectors is debatable here, it can go either way really). We've increased the expectation of weaker hands like J4s immensely by doing so, are exploiting the reg Villian's strategy quite well, and still have a good flatting range which consists of middling/strong hands that will flop well. Our strategy is hard to exploit unless the reg is paying attention and knows the appropriate adjustments (which, surprisingly, isn't the case a lot of the time).

The main point here is that of information hiding. Each time you have to make a decision, there will be multiple actions you can take. Check, call, raise, check/raise, check/fold, check/call, etc. To make it harder for opponents to figure out what you're taking each action with, you need to split your ranges so that each action is balanced. If you ALWAYS slowplay strong value and just check/call, check/call, check/shove all the time, your opponent is obviously going to know that your check/raises on the flop are weak. As such, you'll be highly exploitable.

Continuing our previous example, this is why many good heads-up hyper-turbo regs split their button ranges in half when playing other regs. They limp and min-raise polarized ranges, making it unprofitable for their opponent to 3-bet shove very light whilst still playing 85%+ of all hands from the button.

I hope I've answered your question enough to get you started with this. Balanced play and implementing principles derived from game theory optimal play so as to be less exploitable against other thinking players is quite a popular topic in poker and is actually quite complex. If you want to learn more about it, I'd suggest the following books:

I can only speak from my personal experience which is based on 4 years of really active playing poker. Once we had a nice player on the table WHO always acts the same, at least I didn't see a difference. It was pretty boring because he always took himself 30 seconds, even if it was an easy fold for him. He stared on the board, head down the same amount of time and didn't show many emotions. He talked to us, but he never took much more or less time than his 30 seconds. Therefor it was sometimes really surprising what he played. I hated to play against him (not only because he took my chips) because it was simply a boring "style". But I tell you, it was pretty hard to detect anything. There is one rule in nearly all big poker books which is something like that :

I hope you understand in my poor english what I want to explain. If you don't have to show your cards, but you do it. The opponent uses this info - since it's more than not showing.

I would use my hands, rather than my bets, to "polarize my range.

If I wanted to "represent" any two suited cards, maybe 3-2 or even 6-2 suited. Ditto for "connectors," without the suitedness.

Not the answer you're looking for? Browse other questions tagged texas-hold-em poker-theory betting-strategy poker-strategy range or ask your own question.

7
Heads Up NL Holdem: Best strategy against all in every hand
2
How to use (or not use) Chen formula valuation in different scenarios?
2
What to do when I have a bad hand and everybody is checking?
2
What are the odds of at least one player getting a hand from a range?
3
Is there software that aids street by street range vs. range analysis of hand history?
0
On a round if everyone has called or folded, could the person after the last to call, raise and make everyone have to call again?