What kind of results are people getting with short stack strategies in no limit holdem?

can anyone share their online experience with this or similar short stack strategies?

mine for the last few weeks are below.

there are lots of sss's out there. miller's is in his book. my take on this is that it is real and does work. the big stackers must alter their play when playing against a short stack and it really annoys them. at least sklansky, miller and others think so. you can see what someone thinks the big stackers should do in my answer to a related question. that post is about 8 years old. you can watch a recent video on crushing shortstackers. 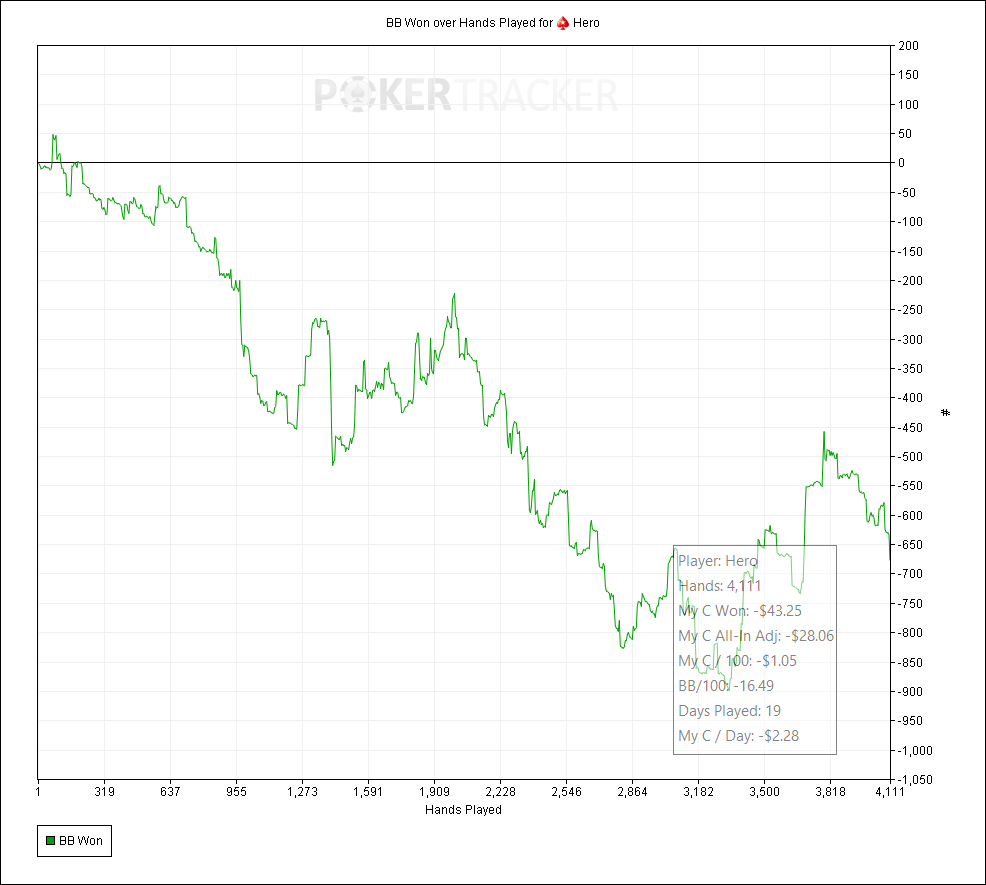 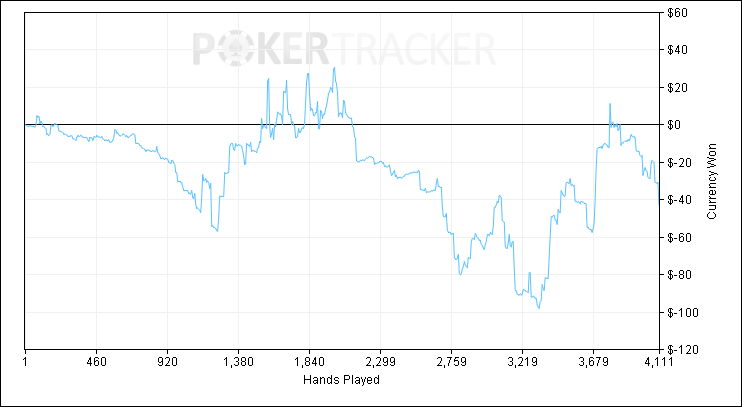 these are for the fast foldem (zone) on bovada

I mentioned the thread in R.G.P (rec.gambling.poker a news group) called "Rose Colored Glasses" about playing short. I tried to find archive but could not. The title meant that the player playing short was seeing the game through rose colored glasses, meaning all the players had the same size stack as the player seeing the game through rose colored glasses. No player could beat him for more then he had, so no player at the table had a stack bigger then his. I think I read the thread at least twenty years ago, so what I do remember about the thread was long ago packed into my brain as things about poker, and not things about the thread and some of it may just come out as my thoughts on playing short.

As I write I am still anxious to see if someone steps up with a good strategy for playing on the minimum buy in in a no limit game. No one has stepped up yet.

Back in the late eighties there was a Pot limit hold'em game at the Sundance casino on Fremont street in Las Vegas. At the time almost every casino had a small poker room on Fremont Street. The game had 1/2 blind and a forty dollar buy-in. Four or five of us would sit around there with reasonable stacks of a few hundred. All night long players would come attack the game with the minimum buy in. Some of these guys would come back half a dozen times or more through out the night, taking that shot at the game. It was a turkey shoot, with few turkeys every surviving, and those that did would come back the next night and keep taking that forty dollar shot. For those of us that sat down with a reasonable amount of chips, it was a honey pot, for the rest of them it was poker death.

Over the years I have seen players sit down with a minimum buy-in at limit games and no limit games. Some get lucky with their pushes and cash out a few hundred ahead, giggle and leave the table. Most just loose their short buy, try again then loose again.

The basic thing about a player that sits down and buys in short, is that buy in tells you they are not a confident player. They are buying in short basically in order to pick up a premium hand then get there money in with it. They are doing this because the only part of the game they understand, and trust themselves to play correctly, is starting with a good hand. They are generally weak passive players that do not know how to bet a hand after the flop, and do not know how to laydown a loser, or are not able to figure out when they have a winner. They are weak players, that have just fallen into the short buy pattern from desperation. It is the only way they can get a little short term success. They usually fit the pattern of a degenerate gambler. This little rant is just based on my observation over the decades.

On a different level, conjecturing about buying in short as a valid winning strategy I fail to see how a strategy where one throws away most of their positive expectation tools can be a winning strategy. It is akin to making fine furniture when your only tool is a chop saw.

If you understand the chop saw metaphor you may be interested in: 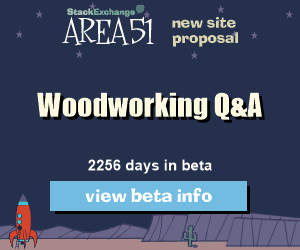 So I looked at A fool proof strategy for wild games. To quote the article for the basic ideal:

Indeed, that’s what makes this strategy “foolproof.” Your goal is to get your money in early with good hands so there are no tough decisions. You aren’t relying on your hand-reading skills or your creativity to give you an advantage; you’re relying on raw math.

The premise here is a wild 2-5 NLHE with lots of fast loose play and lots of big stacks. The author is advocating a 300 buy instead of the maximum buy of 500. The basic play is to make a raise pre-flop with a rank hand then get it all in when you hit a flop.
So many questions come to mind when I read this.

I would say that in the fast game the author described that the effectiveness and usefulness of some game skills are somewhat muted. But they are by no means irrelevant.

This is somewhat like a Martingale system in the sense that it shares a belief that moderating the size of the bet somehow changes the odds of the bet. Only the short buy concept also adds that if you dummy down your game by lowering your buy you have a "Fool proof" way to win. Oh please!

What a short buy really does is diminish some standard deviation at the cost of expectation. If you are a losing player this is a good thing, if you are weak in wild games this also is a good thing, for some even a good place to take a shot. But it is not a winning thing. It is not an optimal way to play. Even if you have success doing this you are not going to have as much success over the long run as an expert player with a bankroll.

Indeed buying short is more about bankroll then about winning strategy. If your worried about fast wild games and losing to much bankroll in such a game, you would do better to simply stay away from them. Buying short can never be an optimal way to win. It is definitely not worth considering to much for serious players as a way to improve their game. Ray I would not consider teaching this in a poker school as a serious subject. Just something handy to know so you can spot it and devise a tactic to kill the turkey.

Sorry for the sick bump.

Short stacking is often a misunderstood "strategy". It gets a bad rap because of ratholers, but it's not all that bad of an idea for most people (provided you know how to play one properly). It is true that there are a lot of spots that you get into when you play as a short stack that are high variance but there are still a couple of merits of short stacking.

It is less variance overall compared to full stacking. While it is true that you get into a lot of spots that are high variance spots your overall variance in your win rate is actually lower than when you full stack (remember that variance is just standard deviation squared. For a full stacking 6max NL game a typical standard deviation is between 75 and 100. If you have a winrate of 4bb/100 with a 87.5 standard deviation your 95% confidence interval over a 100 hands is [-171 BB, 179 BB]. Over 10,000 hands it is [-1350 BB, 2150 BB]. For less than 5% risk of ruin you would require 2876bb or about 29 buy-ins. However, I would recommend about 2x if it is your bread and butter game but 30 buy ins is perfectly reasonable if you are trying to move up in stakes. Now, when you play a short stack your standard deviation goes down. This is because you just win or lose less in terms of big blinds when you are short stacked. So for a short stack your standard deviation is likely to be around 40-60 for 6max. If you have a win rate of 4bb/100 with this standard deviation your 95% confidence interval for 100 and 10k hands are: [-96 BB, 104 BB] and [-600 BB, 1400 BB]. The minimum bankroll for less than 5% risk of ruin is 936bb (i would again 2x this if this is your regular stakes). So, if we look at the bankroll numbers we get 2876bb minimum bankroll or off of my minimum recommendation for a regular stake 5752. For a short stacker we have 936 and 1872. If you are playing 2/4 this amounts to about a minimum of a 11k and a recommended 22k to full stack. If you short stacking 2/4 then you'll need a minimum of 3.7k and a recommended 7.5k.

The point about variance I made before and how you need a smaller bankroll when you are short stacking is also an important consideration in your winrate. Rake is a BITCH at micro/small stakes. At .50/1 6max the rake in bb/100 is going to be between 5 and 10 bb/100, making it that you have to beat the games for that much just to break even. At 2/4 the rake is much less significant (between 1.25 and 2.5 bb/100). If you can short stack 2/4 or full stack .5/1 you should short stack 2/4, provided you can beat 2/4.

Another, less known, thing about short stacking win rates is that when you are short at a table of full stacks your win rate goes up. This is because when you are short (especially <20bb) you can overcall when the pot is going to go multiway. When you're short you can often get your stack in on the flop. When multiway the other plays still have to play postflop with each other and often times they make each other fold. If this happens you get to go to showdown and realize your equity with dead money in the pot. This is why when you look at regs battling each other in 6max they often do not reload to a full stack as when the times when you get very short your win rate can be very very high. The only time this is not true is when you have a fish at your table. If this is true then it is often can be advantageous to be full stacked (especially if you're on their left) as they will be losing at a high rate and your winrate will go up with a full stack.

Of course, this info is only relevant if you can beat the games. If you can't your focus should be learning how to win.

There are two reason why short stacking doesn't work, and is generally frowned upon by advanced players.

Not the answer you're looking for? Browse other questions tagged texas-hold-em no-limit short-stack or ask your own question.

7
Short stack play - best way to deal with it?

6
What are the odds of getting the same four-of-a-kind twice in a row?
7
Short stack play - best way to deal with it?
14
What is the min-raise and min-reraise in Holdem No Limit?
6
Four of a kind and Three of a kind at the same time. What are the odds?
3
Texas Holdem Poker No Limit betting rules, How does Bet, Raise and by what value it is increased?
3
Should big denomination cihps be explicitly separated in a raise if they are in the same stack with smaller chips?