Is there statistically any combination worse than 2 7 offsuit for preflop Texas Hold'em?

The question basically says it all. I've always heard/played 2 7 offsuit as it was the worst hand, but I never looked more into it, it just made sense. Does anyone know if there is any hand worse for preflop (statistically) than 2 7 offsuit in Texas Hold'em?

I once spent an afternoon analyzing 7-2 with Poker Probe (An old program by Mike Caro). I was curious if there was any situation that justified making a call with 2-7. PP was a pretty simple program, you could run a hand against a configurable hand, or a number of random hands. It for example could tell you how often a particular hand would hold up against a particular number of players. It did not account for anything but the cards.

The more players in a pot the lower the EV is with the hand.

The only situation I could find were you could actually place a chip in the pot and get a slight positive EV on that chip was when your were against one opponent and could get five to one on that chip. If the blinds are ten and fifteen, and you are in the small blind you have a slight positive EV for the five dollar call when head up, if there is another limper in the hand the EV goes negative for the five dollar call. This EV is so low, just a very low percentage like 2 or 3 percent that factors like rake and the bad position your in, the possibility the BB raises, make it a negative play. Even in a time game the time you waste playing the hand might eat up any positive EV.

I think it is safe to say that when compared to all other hands, that 2-7 is the most unplayable hand in poker. Being the lowest possible unconnected two cards the hand never gets the number of outs as even two smaller cards that are a little more connected.

It depends on how many players are in the pot. Using the pre-flop calculator and assuming you only know your own hand, here is a table of the winning odds (calculated at https://www.888poker.com/poker/poker-odds-calculator):

The odds are different if you know two hands in the game (e.g., player 1 with 72o vs player 2 with 32o), and there the 32o is worst until you are 6-handed, in which case you both should be laying those hands down.

I was just having this conversation with a friend. So I wrote a little program to explore the idea and graphed the data showing when 72o becomes a slightly better hand than 32o.

Basically, when the 32o straight connects it holds up better with more people on the table while the range that 72o beats is no longer as valuable. Making 72o the worst hand to hold statistically. But when there are fewer players (2-4) the 72o will win more w/over card than the lower straight connects.

On the graph below the y axis is the win rate and the x axis is the hand against number of players. 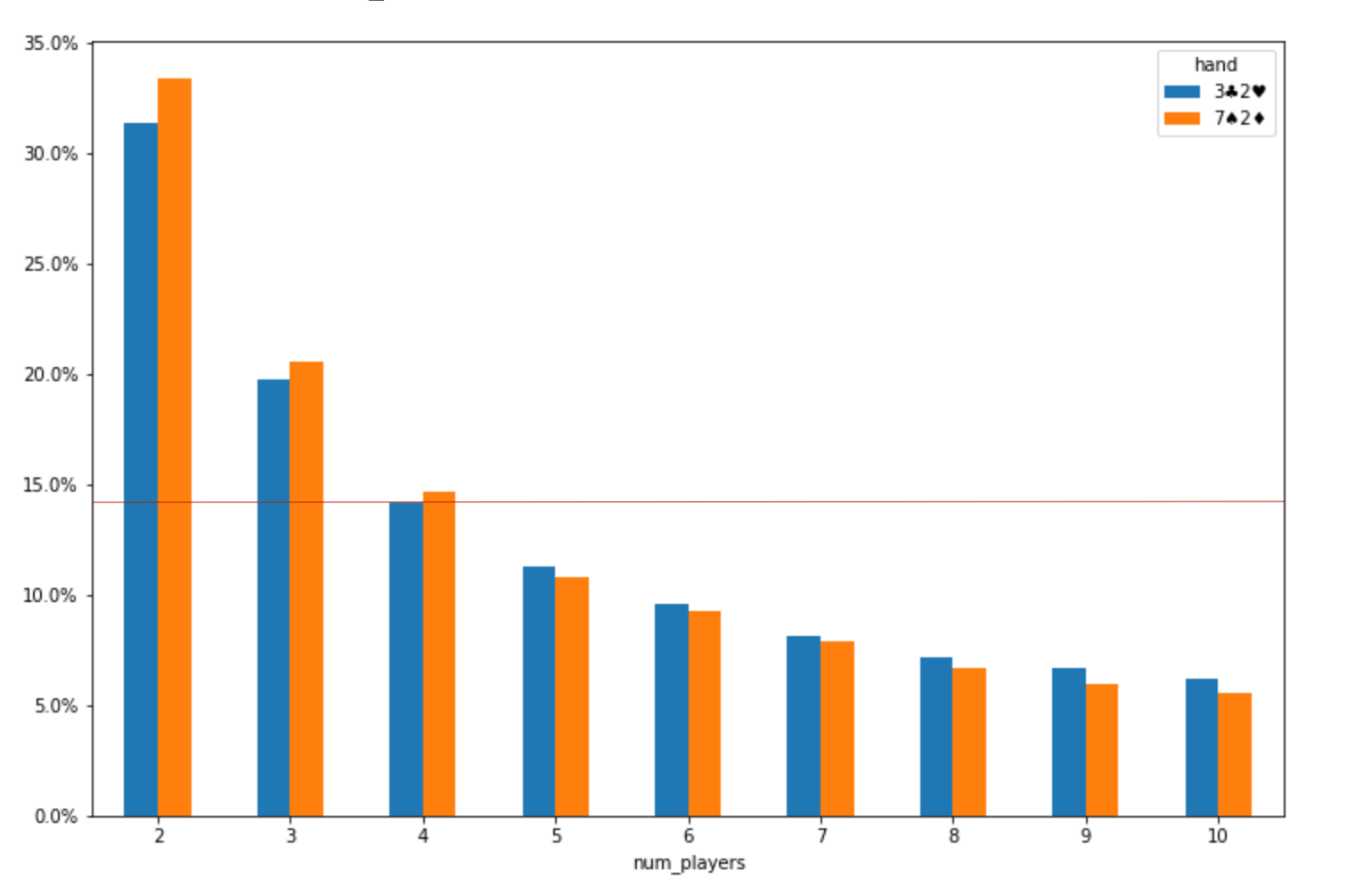 No. Against unknown hands, cash or tournament, you'd be hard-pressed to have both the implied odds and the fold equity to play this hand. The only reason to play this hand would be if it was limped around to you in the BB (which is why open-limping isn't wise: BB can hit his trash he would have folded).

Not the answer you're looking for? Browse other questions tagged texas-hold-em statistics pre-flop or ask your own question.

5
1/2 NL: Call this villain's all-in with top pair, ace kicker?
6
What I did was right?
2
AAA flop, KJ holding against very aggressive player
3
Do I have to show all players if I show to one?
4
Why no split-pot when the communal cards are strongest?
1
Fold in preflop but could win with a flush. How to deal in this situation?
0
Misdeal.....or not?
2
Why these differences in HJ 3-bettor and UTG 3-bet caller's range?
2
How to play AK hand against poor players anticipating that many of them will call you?
0
String of Quads on a well known online poker website