Stack Overflow for Teams is moving to its own domain! When the migration is complete, you will access your Teams at stackoverflowteams.com, and they will no longer appear in the left sidebar on stackoverflow.com.

Check your email for updates.

Why no split-pot when the communal cards are strongest?

In anticipation of a poker night tonight, I'm brushing up on my skills by playing a quick online game with a computer.

I was surprised to have won this hand: 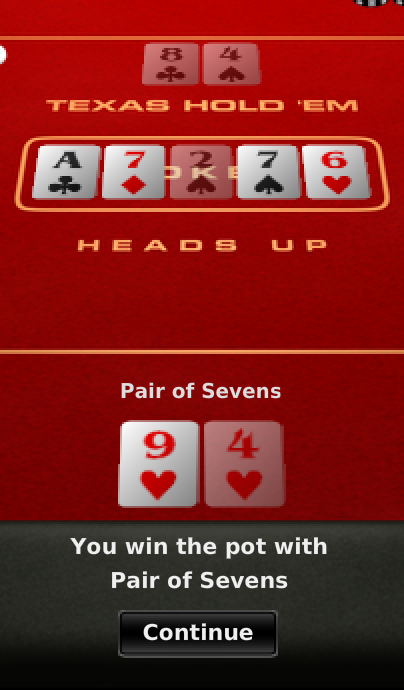 I can see that my 9 is obviously playing some role in settling the score, but it was my understanding that if the communal hand was better (ranked higher) than any of the other hands in the game, that the pot would be split.

As per this explanation of a split pot:

In my example, the communal cards have a better hand than me and my opponent. Should that not mean a split pot?

I believe the question is different from the proposed duplicate because it pertains to a situation where the top five cards in the communal pile are not the best.

I have realised, since posting, that the 2 Clubs held by the communal pile is actually the week link, as both myself and my opponent get to swap it out with our higher cards. I forgot that the rest of our 'trickless' hand can be made up from the communal pile (i.e we get to use the Ace Clubs and 6 Hearts in our 'Top Five'.

20
What is the"Top Five Cards" rule and how does it apply to splitting pots?

20
What is the"Top Five Cards" rule and how does it apply to splitting pots?
5
Name of five card Texas Hold'em game?
6
Easy to remember push/fold/callpush table/formula
3
Split Pot question?
1
Can I Bet and Call Blind
2
Premature turn of a card