How to analyze why I am losing?

I recently started playing microstakes but it seems that I am consistently losing since the third day of my play (I was winning during the first two days). I was able to win first 2500 hands. 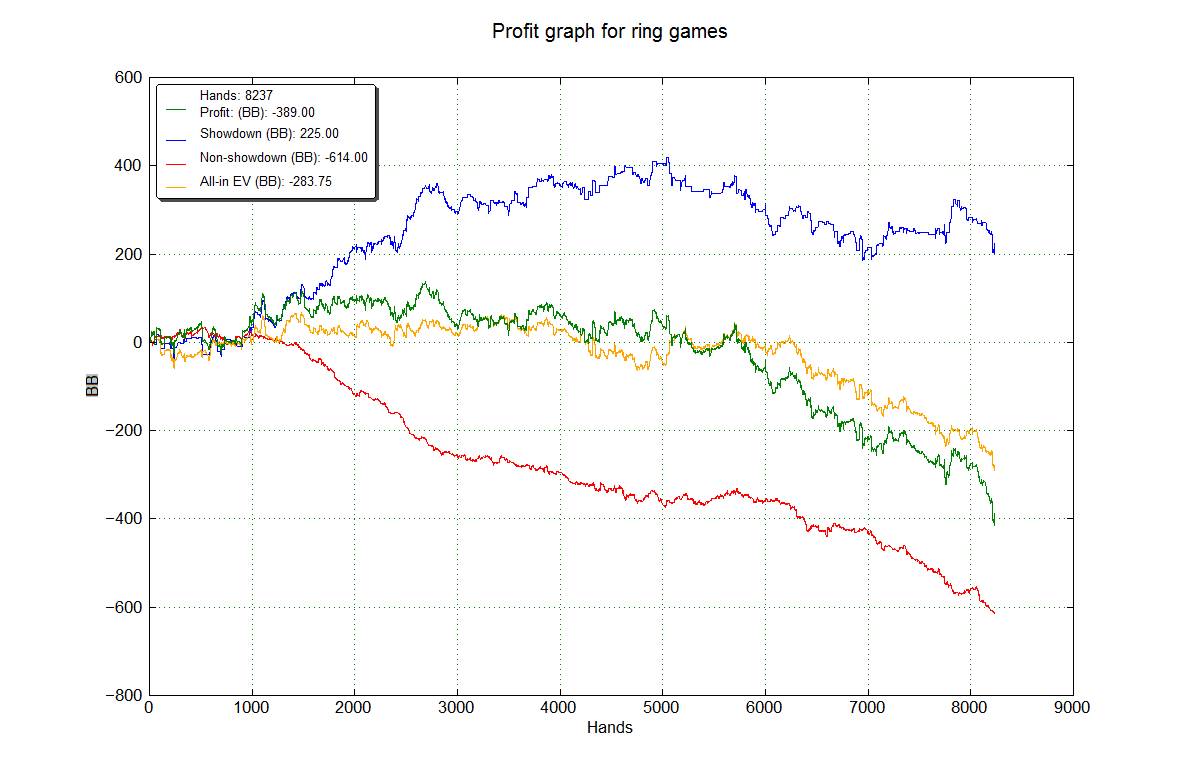 I tried to analyze my stats before starting losing:

To the ones after starting losing:

What can be a possible root cause that I started losing?

What additional data would be useful for further analysis?

Here is my analysis:

In general, you're playing too loosely. Since you show only aggregate info, it's impossible to pinpoint specific errors you're making, but there are some things about your charts that stand out and are important to address.

You should probably also be making more money from the button than from any other position, and you're not. Note that the button was the source of most of your profit in the first chart but it fares poorly in the second. People are often really skeptical of button open raises, especially when your pre-flop stats are already high, so you might want to tighten up.

Your aggression frequencies are also quite high, especially on the flop. When you combine your high pre-flop VPIP and PFR stats with your high flop aggression frequencies, it probably means you're playing a lot of weak hands quite strongly. An effective strategy against this kind of player is just to play a tighter pre-flop range and get your good hands paid off.

You're also folding to 3-bets infrequently given your pre-flop stats. Since you're playing a loose pre-flop range, you might want to give up more often to a 3-bet, particularly from out of position such as when you're in the small blind. This means you're putting money into the pot when you're usually behind and you don't have a positional advantage to compensate for it.

You make the comment that you think you're folding too much, apparently based on the showdown percentages. I think that's misleading, because you're playing a slightly tighter range in the first chart, so you're more likely to win at showdown with that tighter range. It doesn't follow that you should fold less.

Maybe you could post some representative hands and solicit comments on specific play.

What Christ said is exactly right. I would only like to add this: POSITION POSITION POSITION. Most important part of skillful poker. This took me too long to learn, and will require some off the table study. For UTG, UTG+1, MP1, etc., 9 hands, figure out based on the games you have been in, what an acceptable opening range is. Do this for every seat. On MY (not some googled img that I thought looked right) chart I have; UTG: 10-13%, next to act: 13-15%, 15-20%, 20-25%, 25-36%, 36-45%, and up to about 55% on the button (that's about 86o+). This assumes no one has yet entered the pot. If someone has I take the 'seat range'-1% and call/3-bet with those hands (Obviously there are tendencies our opponents can demonstrate that will change this). 3-bets are usually reserved for the super premium hands.

When you are at a table, you get a hand, this hand is within the 'seat-range' that you personally made for yourself (this will probably take an equity calculator to know), and no one has raised. SAY OUT LOUD your position at the table EVERY STREET and BEFORE YOU ACT. if you are oop, most often (not always) we look to ck/call. When in position, we often (not always) look to raise/re-raise. This alone should get you away from a good number of showdowns. We often want poker hands to end before showdown.

One thing you could try to download Jivaro. It's a free poker stats overlay for PokerStars and will show you your stats and the stats of your opponents. If your playing 9 handed cash games, you should have quite low VPIP ℅, say less than 20℅.

There's a good 1 page version of starting hands that shows you in a simple way when it's good to bet and not. Www.pokerology.com/lessons/starting-hand-selection

Not the answer you're looking for? Browse other questions tagged hud microstakes or ask your own question.

1
How to play AQ on flop against maniac?

4
How to use fpdb HUD in the game
2
How to play top pair with flush draw on the flop?
1
How to play AQ on flop against maniac?
1
How to plan IP when having two pair?
3
How to play against a fish when having straight
2
Decrease in utility playing in same stakes (I stop caring about the amount of winning after some time)
1
Is this HUD stat profile a nit?
3
How to configure a HUD for Omaha game?
0
Why is limping bad at the microstakes?