What are the odds of a at least a certain amount of aces being dealt depending on the number of players?

I'm interested to know what the odds are of at least a certain amount of aces being dealt anywhere, depending on the amount of players.

I'd like to expand on why I'm interested in knowing this. I'm trying to explain to friends of mine who are starting to play poker that the likelihood of facing an Ace is something to take into account, but is dependent on how many players are on the table.

I was told that when playing ten handed, the likelihood of facing at least one Ace is quite high. (90% or so) So, I'm interested in the exact numbers so I have something to talk about.

These are the chances (assuming you have no ace):

These are valid only preflop assuming that there are 50 cards left in the deck (you are holding 2) and you are one of the players (2 players = 1 opponent with 2 cards; 3 players = 2 opponents with 4 cards and so on)

You can't go by strictly odds, because the odds are good that an ace was not folded preflop.

My assumption, on a full table (8-10) is there are 2 aces in the pockets; I'll confirm more exactly, & who has them once we start doing post-flop betting.

I read this on another site & found it valid/useful, for the raw odds for 2 of you having aces(relevant to assessing your kicker, if you're one of them)

Depends on how many people are at the table originally, I think one of the things that doesn't get communicated properly is the filtering effect.

In micro, alot of people play an A no matter what its paired with if you want to assume that is true in a 9 way then your really asking what is the probability that any of my other 8 opponents were dealt an ace preflop even if there is only one left post flop. This is easiest calculated as the probability that none of the 8 people hit an ace. To do this we just imagine dealing out 16 cards out of a 47 card deck with 2 aces left in it.

So the probability one of the other 16 cards is an ace given what you flopped is .57. And you have to figure they would limp in wiht it at 1bb or if they are loose play it at 3bb at a low stakes table. So even if you are down to one person you have to put him on it 57% of the time.

Now your not supposed to play an ace with a weak kicker on a big table, and incidentally this is exactly why. 57% of the time some one else has it, but if your kicker is weak more than not they got you dominated.

Don't fall in love with AT or A9, because the odds are good that another retained ace hasa better kicker; now, if you flop top pair, though, you're in good shape for thefirst post-flop betting round, but you've got a less than 5% chance of doing that -- of course, it's called gambling for a reason -- I tend to play a 9 or higher kicker to my ace, especially if suited(only less than a 1% chance of flopping a flush, but, hey, if I hit, or even get a 4-flush on the flop, I'm happy to push the pot up for a later payoff(look up "implied odds" & "pot odds")

I don't know why no one has answered this for you yet. It's a reasonable thing to want to know, but as others may have mentioned, should be more for novelty than for using to make your in-game decisions.

Anyways, here's a breakdown I put together. A lot of figures are fractions of percents, so I simplified it by rounding everything up to the nearest whole percent.

The likelihood of an Ace is always the same, what changes is the number of cards in play based on the number of players. The more players, the more cards dealt, meaning the more likely there is someone has at least one Ace. I made two charts; the first one is for 2-10 players in general, and the second is an adjusted chart which assumes that you are one of the players, and you have two non-Ace cards. This means there are effectively only 50 cards in the deck, instead of 52. These figures are, of course, based on pre-flop distribution. 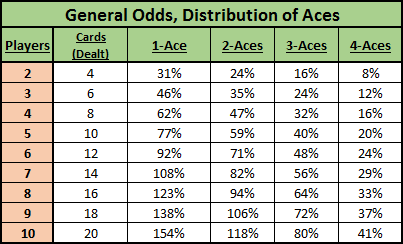 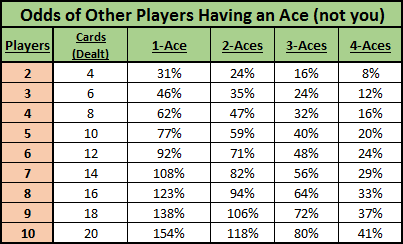 Hopefully this is what you were looking for!

Not the answer you're looking for? Browse other questions tagged odds probability or ask your own question.