How would one go about writing a poker calculator?

Plug in 1-X starting hands then return the percentage of wins.

I'm not familiar with .NET and stuff. I probably should mention that I'm not a professional programmer myself. But there surely are a lot of great libraries in pure C. Using C++ and i5 CPU I personally get about 4.4 million hands/s in Monte Carlo with 3 players and 2.3 million with 6 players. But that's just raw unoptimized Monte-Carlo. Brute-force enumeration goes at the rate of 190M hands/sec. So your 205,476,480 boards don't look too scary to me. This number is actually wrong: you should have calculated it as combin(48,5) = 1,712,304. At 190M/sec that's an instant. So I can assume that the bottleneck is hand evaluation algorithm.

As far as Monte Carlo goes I noticed that the bottleneck is also the deck shuffle. I've come up with this algorithm:

Here I have to generate only necessary amount of random numbers,given cards and randomly picked cards are put in the back of the deck in specified order and I can use them as board or hole cards like this:

In case of small numbers of hands needed to be evaluated (less than 100M) I think you should use exhuastive enumeration. Otherwise 100,000 of Monte Carlo iterations works just fine. The output of a program is entirely up to you depending on what you are trying to analyze. Hope I've helped in some way:)

Features important to me:

This took me about 20 hours but I am a developer
I moved to a new version of .NET and Visual Studio and wanted a project to practice with

Can get up to a 10% error with just 10,000 shuffles but for just planning that can be enough. On the higher % the error is smaller. The smaller % like 2 7 off suite is a bigger error but that is the stuff you are not usually interested in.

On a faster machine with 8 core could process 8 hands in parallel so would get 100,000 down to the 10 second range.

The online calculators that are instantaneous I guess process all combinations at like 20 million shuffles each and store that. I am not really sure how they do it.

For speed could stop calculating a hand when you know it is dead. But that would be a lot more logic and I wanted the detail on all hands.

In machine learning you can do something called pruning but I am not strong enough for that and again I wanted the detail.

At 10 million a Monte Carlo method is going to be very accurate. 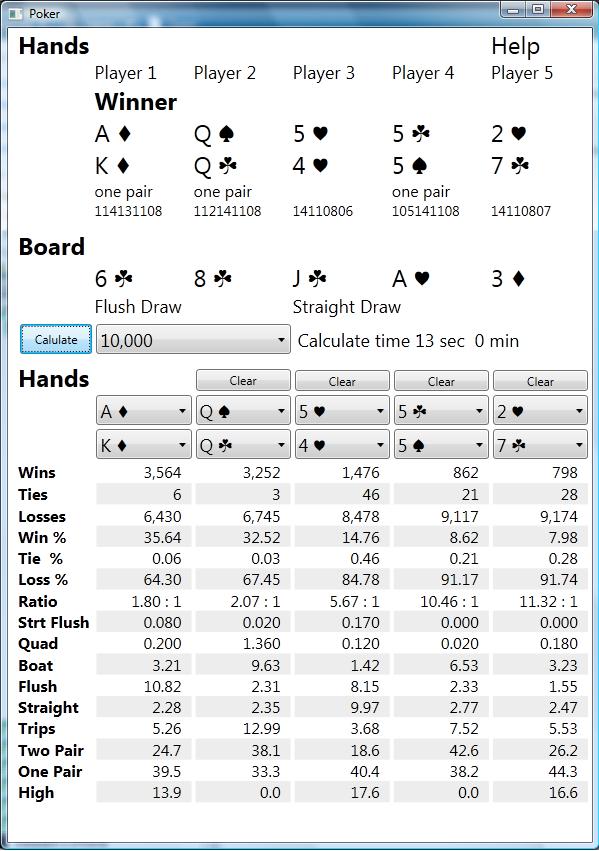 Not the answer you're looking for? Browse other questions tagged odds strategy or ask your own question.

2
Formula not checking out under certain conditions
2
Tallying monte carlo simulation and ties for Texas hold'em
1
Feature In A Poker Game
0
How are chances of winning pot worked out?
0
Wins versus ties
2
strategy for “roulette poker”
0
Calculating my bet size if I know my bluff % to make villain indifferent
1
How do I use combination math to calculate at least two spades in the first 3 cards in a stud game
0
How to calculate pre-flop odds with hands revealed?