How does one in principle compute the Nash equilibrium strategy for NLH? Are there different methods?

Let us simplify the case and consider only 2 players and only 1 hand in isolation. (No history)

Your question is very general. Game Theory, which employs Nash equilibrium, is a set of methods to model situations where players are in conflict.

If your input is the entire game, the problem becomes unsolvable. First of all I am not sure if it exists a Nash solution, but even if it does, it would be nearly impossible to calculate, given all these parameters (players, stack_sizes, cards, position, gameplays, table-dynamics, history, meta-game, etc.)

You can use it partially for individual situation, though mainly to get an idea of where the game leads to. As an example, I would suggest looking at Nash Equlibrium for HeadsUP shortstack push/fold situations

Finally, bear in mind that even if you could magically calculate nash strategies for more complex situations, that wouldn't be necessarily winning in the long run. In gerenal, Nash equilibrium calculates a defensive strategy, so as not to get exploited by your rational opponent. In Holdem, most of your winning will result exactly from the opposite, i.e. finding the weakness of your opponent and exploiting it. As an example:

A well studied game is the paper-rock-scissors, where Nash mixed strategy equilibrium suggests you randomly play paper, rock, scissors, 33% of the time each. With this strategy, even a computer opponent will never be able to exploit you. The opponent will tend to play the same, and in the end you will reach Nash equilibrium, where no one wins or loses. If, however, you have an opponent who will ALWAYS play the rock, it is obvious that you want to exploit his "weakness" and play ALWAYS paper, thus gaining profit. This is also true in poker, of course in a more general and complicated way.

Nash Equilibrium is where two players don't have an incentive to change their strategy.

Let us simplify the case and consider only 2 players and only 1 hand in isolation. (No history)

History will never matter for a Nash Equilibrium strat. Looking at 1 hand in isolation wont work because you have to look at the whole range. Unless you are referring to a toy game where each player always has the same specific hand. In which case: 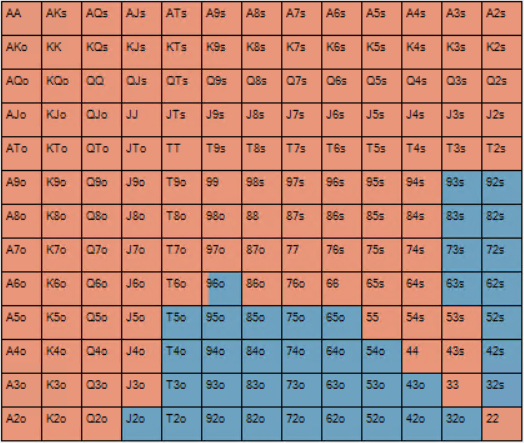 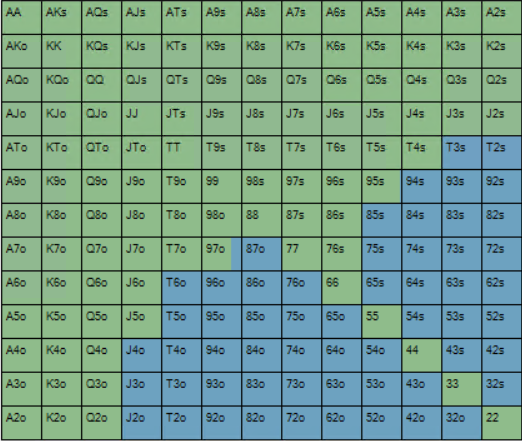 3
Position/order of dealing post pre-flop
4
Pocket Aces in 9-handed
2
Question on Strategy Calculation (from Bill Chen's Book Math of Poker)
6
Is the heads up NLH no mixing Nash equilibrium strategy known?
0
Is the Nash equilibrum strategy probabilistic?
4
ICM vs FGS in spin & go's
4
Does Heads Up Hold ’em GTO assume a linear relationship between utility and money?
1
Can a push/fold strategy be optimal (ie EV>=0 against any other strategy) in general
0
Online Software Tournament Test Case